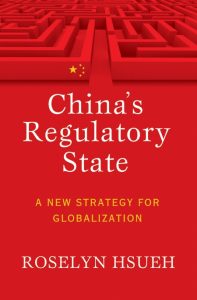 Today’s China is governed by a new economic model that marks a radical break from the Mao and Deng eras. The new China departs fundamentally from that of the East Asian developmental state and its Communist past. But it is not a liberal economic model. How can China possibly retain elements of a statist economic model when it has liberalized foreign direct investment more than any other developing country in recent years? How can it retain state control over critical sectors and meet commitments made in its accession to the World Trade Organization? What does this mode of economic integration reveal about China’s state capacity and development strategy? In China’s Regulatory State: A New Strategy for Globalization, Roselyn Hsueh unravels these puzzles by demonstrating that China only appears as a more liberal state, for it has complemented liberalization at the economy-wide level with reregulation at the sectoral level.

By investigating in depth how China combines liberalization and reregulation in different industries, Hsueh gives the most complete picture yet of China’s regulatory state. With special attention given to telecommunications and textiles, she contends that a strategic value logic explains how the state, with its different levels of authority and myriad of bureaucracies, interacts with new economic stakeholders to enhance its control in certain economic sectors and issue areas even while relinquishing its control in others. By examining across time (1978-2010), Hsueh further finds that the organization of institutions and boom-bust cycles influence how the state reformulates old rules and creates new ones to maximize benefits and minimize costs after an initial phase of liberalization. This path-breaking analysis of state goals, government-business relations, and methods of governance across industries in China also considers Japan, South Korea, and Taiwan’s manifestly different globalization.

To order (paperback or hardcover), visit the Cornell University Press website. You can also find the book on Amazon.

“Conceptually, theoretically, and empirically, China’s Regulatory State: A New Strategy for Globalization is a pivotal contribution to the discourse on China’s development model and regulatory landscape, to the literature on government-business relations, and to the understanding of patterns of state control as part of the discipline of political economy. Hsueh has accomplished a painstaking task of uncovering a critical facet of economic liberalization in China, further exploration of which might unearth newer aspects of China’s development strategy or bring out newer interpretations…. The book, while interesting and useful for general readers, is indispensable for scholars, researchers and students of political economy, international business, and international economics.”

“Hsueh’s book [is] a valuable addition to the rich literature that probes the complicated relationship between the state and businesses in the reforming China… In contrast to conventional studies that treat Chinese industry as a whole distinct from the state, the sectoral model allows Hsueh to differentiate between various industries according to their sectoral characteristics―their values to China’s national security and competitiveness, in this study―and then examine their respective relationships to the government… a sectoral model makes it more explicit that the different endowments and strategic values attached to each industry determine policy designs and outcomes… the book is an excellent application of important developments in the literature on international and comparative political economy.. to China’s specific context. The comparative studies that include cases from both China and other East Asian developmental states are effective in illustrating the complexity of China’s reforms as well as placing them into a broader context.”

“I have no reservation in recommending this book as the most theoretically advanced and comprehensive statement on industrial policy in the contemporary China studies field. For those of us who relish dense factual narratives the book is a compelling read for its rich detail on variations in state strategies toward several important industries.”

“Is China a developmental state like its regional neighbors or an example of some other form of capitalism? Roselyn Hsueh’s China’s Regulatory State tackles this taxonomical issue through case studies of industrial strategy in comparative perspective…. Hsueh seeks to explain the nature of China’s developmental model, which is ‘radically different from any we have seen before’ (p. 2). This departure raises questions about the logic underlying its particular path…. differentiating state policy by sector sheds light on common misconceptions of China’s political economy. The fact that China attracts more FDI than any other country, for example, does not mean that it also has the most liberalized economy…. In China, patterns of state regulation in different sectors are tied to the strategic value framework, rather than a statist impulse to limit foreign capital and pursue industrial policy across the board.”

“Roselyn Hsueh has written a very good book about the transformation of the Chinese economy in the decade since the country’s accession to the World Trade Organization (WTO). It is a solid piece of workand it will be of interest to scholars of the Chinese economy as well as policy makers who are interested in China’s growing role in the global economy.”

“This book combines the accuracy and knowledge-based relevance of an academic studyby the best research standardswith a clearfluentand pedagogical way of introducing the reader to a rather complex set of issues. The quality of the book itself―a text perfectly edited balanced displaying the appropriate tables and figures in the right places and allowing any level of reading from the layman up to the specialist deserves compliments.”

“Through extensive interviews and painstaking research, Hsueh demonstrates a distinct pattern of government re-regulation even after China joined the WTO. In the process, she demolishes the myth of an increasingly unfettered Chinese economy…. This book is a must-read for students of political economy and for those seeking to make sense of contemporary China’s complex economic landscape.”

No comments to show.

No archives to show.