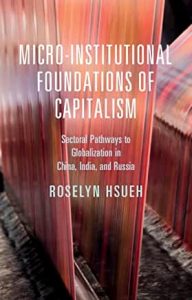 What is the relationship between internal development and integration into the global economy in developing countries? How and why do state–market relations differ? And do these differences matter in the post-cold war era of global conflict and cooperation? Departing from the conventional wisdom of developmental versus neoliberal state and national versus subnational variation in globalization trajectories, Micro-institutional Foundations of Capitalism introduces a new model of globalization: “national configurations of sectoral models.”

Adopting a historical and comparative approach and examining sectors from textiles to telecommunications in China, India, and Russia, the book’s Strategic Value Framework illuminates the intersubjective and value-bounded rationality of state elites as they respond to internal and external pressures and the impacts of sectoral structures and organization of institutions. Bridging materialist arguments with constructivism and historical institutionalism, the book assesses the role of regime type and open economy politics in today’s globalization backlash.

The book’s multilevel comparative case research design draws from immersive fieldwork, leverages attention to context specificity and a variety of qualitative and quantitative data, and extends Roselyn Hsueh’s comparative work on the politics of market reform and China’s regulatory state. Completed during the global pandemic, this important new book sheds light on the national sector-specific character of capitalistic development for the future of global conflict and cooperation.

To pre-order (paperback or hardcover), visit the Cambridge University Press website. Receive discount at checkout. You can also find the book on Amazon.

‘Roselyn Hsueh has produced a major work featuring an inventive model, the Strategic Value Framework. This schema collapses an array of factors into a powerful template that explicates how three seemingly disparate states variously govern what their leaders perceive to be strategic versus non-strategic industrial sectors. The patterns she uncovers will surely be useful for researchers investigating other countries and other sectors.’ Dorothy J. Solinger, Professor of Political Science, School of Social Sciences, University of California, Irvine

‘Roselyn Hsueh’s book is a tour de force that elevates the standards of comparative political economy. Her argument develops a synoptic and comparative perspective on state priorities, combined with an interactive framework of microlevel sectoral structures and distribution of interested actors. What distinguishes her argument is attention to multiple faces of a state, the perceived value accorded to sectors, combined with governance micro-institutions that vary by sector. It is a must read for scholars of China, India and Russia and of comparative political economy.’ Aseema Sinha, Wagener Chair of South Asian Politics and George R. Roberts Fellow, Claremont McKenna College

‘Micro-institutional Foundations of Capitalism is a highly original, sophisticated, and well-researched study of three large non-Western economies, each analyzed at the sectoral level using Hsueh’s Strategic Value Framework. This book offers a compelling example of how to conduct in-depth research on important cases from different world regions while generating novel theoretical implications for comparative political economy.’ Rudra Sil, Professor of Political Science and Co-Director of the Huntsman Program in International Studies and Business, University of Pennsylvania

‘Roselyn Hsueh has developed an interesting strategic value framework and produced an enormously important book on the state, industrial sectors, and development. She applies her framework in meticulous studies of China, India, and Russia. The resulting comparison of these countries is a feast for the mind.’ Dali L. Yang, William C. Reavis Professor of Political Science, The University of Chicago

‘Hsueh’s new book on comparative economic governance is brilliant. The book’s analysis of multiple sectors in China, India and Russia builds on but goes well beyond existing scholarship on state capacity and economic performance. Its sophisticated analytical framework integrates sectoral and sub-sectoral characteristics with national elites’ intersubjective responses to external and internal pressures. The book’s rigorous, grounded research sets a high standard for qualitative analysis. This is a must read for anyone interested in the political economy of development.’ Richard Doner, Professor Emeritus of Political Science, Emory University

‘Roselyn Hsueh’s book achieves quite a few remarkable feats by underlining the significance of the perception of strategic value of a sector within the state. The book brings ideas and the state back in without undermining the importance of material factors. It is a remarkable feat to compare China, India and Russia in a historically serious way, without compromising methodological rigor. Hsueh is one of those rare scholars who have demonstrated that comparative area studies can marry richness with rigor, without compromising either.’ Rahul Mukherji, Professor and Chair, Modern Politics of South Asia, South Asia Institute, Heidelberg University

No comments to show.

No archives to show.